Quebec, May 29, 2017 – Jean St-Gelais, Chairman of the Board and Chief Executive Officer of La Capitale Insurance and Financial Group, has revealed the names of the 22 student-athletes who were awarded a total of $80,000 in bursaries in the 8th edition of the La Capitale Insurance and Financial Group Bursary Program. He also announced that the company would be renewing its agreement with the Quebec Foundation for Athletic Excellence (QFAE) for a total of $200,000 over two years ($100,000 each in 2018 and 2019).

This year’s recipients include several athletes who have shone on the international stage, such as Katerine Savard, who won a bronze medal in 4 x 200 m freestyle swimming at the 2016 Olympic Games in Rio, Andréanne Langlois, who placed 8th in the Olympic kayak sprint (K4) in Rio, and Laurence Vincent-Lapointe, who set an unofficial world record in canoe sprint at the 2017 National Trials. Other recipients are currently training to qualify for the 2018 PyeongChang Winter Olympics. They include short track speed skaters Kim Boutin, who won the gold medal in the 1,500 m event at the World Cup in Dresden, and Samuel Girard, who won the silver medal in the 1,500 m event at the most recent World Championships.

“Through this partnership, La Capitale is once again demonstrating its values by proudly supporting the development of young student-athletes in Quebec. We wish to take this opportunity to highlight the importance of adopting and maintaining healthy lifestyle habits at all stages of life. Congratulations to our bursary recipients for their perseverance in pursuing their dreams,” declared St-Gelais.

The Foundation’s president, Claude Chagnon, thanked La Capitale for the trust they showed in renewing the partnership until 2019. “We’re very proud of our partner renewal rate. Partners play a significant role in the Foundation’s success. By remaining loyal year after year, La Capitale provides the QFAE with stability and sustainability. In return, La Capitale is able to follow the development and progression of its bursary recipients through their athletic and academic careers up to their entry into the job market.” 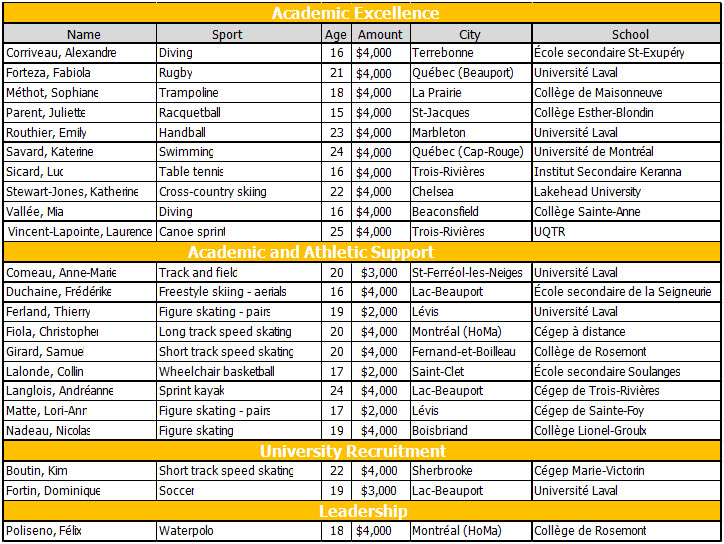 La Capitale Insurance and Financial Group, created in 1940, has a strong presence across Quebec and throughout Canada. With over 2,680 employees and guided by the values of mutualism on which it was founded, La Capitale works with clients to build, protect and value what they feel counts for their financial security. It offers insurance products and financial services to the general public as well as to Quebec public service employees. With assets of $6.4 billion, La Capitale occupies a choice position among leading insurers in Canada. Given the key social and economic role La Capitale plays, it is proud to contribute to the progress and well-being of the whole community through the La Capitale Financial Group Foundation.

About the Quebec Foundation for Athletic Excellence

The Foundation (faeq.com) has made a name for itself with a personalized approach, a rigorous management style and its influence in sports and education circles. In 2017, the Foundation will award $1,350,000 in bursaries to over 475 student-athletes and encourage the conciliation of school and high-performance sports. The Foundation works with partners and former scholarship recipients to promote academic, athletic and professional success. Note that from September 22-23-24, 2017, Mont-Tremblant will host the Défi 808 Bonneville, a major cycling event benefitting the FAEQ. Registration is now open at www.defi808bonneville.com