Major partnership between the Videotron Centre and La Capitale 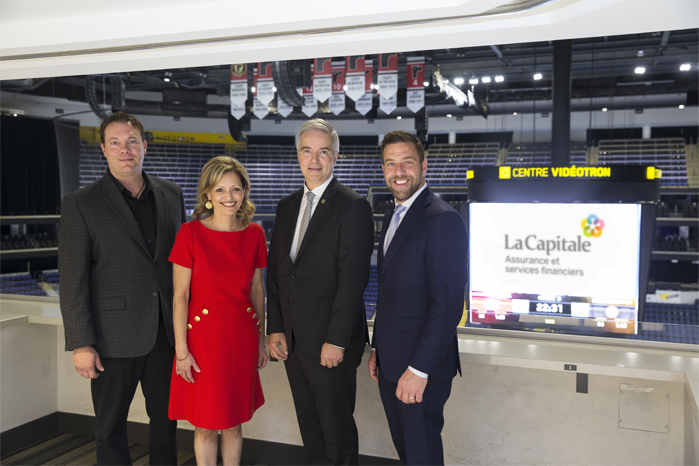 October 4, 2017 – Quebecor Sports and Entertainment Group is pleased to announce a new major long-term partnership between La Capitale Insurance and Financial Group and the Videotron Centre.

As part of this new partnership, the Loft Zone will be renamed the La Capitale Loft. The company headquartered in Quebec City is also becoming the official presenter of the Videotron Centre's events calendar, in addition to being a major partner of the Quebec Remparts Hockey Club.

“La Capitale is a prestige partner and a major economic player in the Quebec City area and the province as a whole. We are delighted to join forces with La Capitale! This association with such a large company is definitely a valuable asset that will enable the Videotron Centre to continue to innovate and raise its profile. Our organizations are both committed to offering the best client experience, and the La Capitale Loft is the perfect place to spend an unforgettable evening attending events presented at the Videotron Centre,” said Martin Tremblay, Chief Operating Officer of the Quebecor Sports and Entertainment Group.

The Loft Zone will be decorated in La Capitale’s colours on Friday, October 6, when Roger Waters performs at the Vidoetron Centre.

“There is an undeniable proximity effect between La Capitale and the Videotron Centre, a place that’s known for great entertainment and is already well established in our city,” said Jean St-Gelais, La Capitale's Chairman of the Board and Chief Executive Officer. “The Videotron Centre gives Greater Quebec City Area (GQCA) residents access to high-caliber entertainment featuring Canadian and international artists, as well as amateur sports.”

“La Capitale is delighted to, through this partnership, contribute to the expansion of the GQCA’s cultural and sports activities. We can’t wait to see our colours on display at the Videotron Centre!” Mr. St-Gelais added.

La Capitale Insurance and Financial Group, created in 1940, has a strong presence across Quebec and throughout Canada. With over 2,680 employees and guided by the values of mutualism on which it was founded, La Capitale works with clients to build, protect and value what they feel counts for their financial security. It offers insurance products and financial services to the general public as well as to Quebec public service employees. With assets of $6.4 billion, La Capitale occupies a choice position among leading insurers in Canada.

About the Videotron Centre

The Videotron Centre is an 18,000-seat multipurpose arena that can accommodate more than 20,000 spectators for concerts. The multiple configurations of this venue, which opened on September 12, 2015, make it suitable for both major concerts and sporting events. It is home to the Quebec Remparts hockey club, which is a member of the Quebec Major Junior Hockey League (QMJHL). The venue is also suitable for major-league hockey, since it meets National Hockey League (NHL) standards.